Thursday the 3rd of November was an exciting night, one because “Sorry I didn’t Know’ was being aired for the first time on ITV, but I was also performing at Up the creek, Blackout competition, I applied 6 weeks previously so the anticipation was defiantly surfacing on the actually day, especially as this was my first ever time performing at the renowned Up The Creek Comedy Club. The buzz from being on ITV the same evening that I would be performing was unreal. So I arrived around 7.30m to register, faced with 14 other comedian not knowing what their act was like and what the audience expectations would be.

Being in this lovely vibrant venue that to me was perfect for comedy was exciting, myself and the other comedians met the host for the night who explained that we had the first 2mins without interruption, however once the light goes out and on again after the 2 minutes the audience can now state the word “Cards” or “Off” until that whole audience was in agreement. If you get shouted off before the 5 minutes ends you lose, if you last the whole 5 minutes without any interruptions apart from laughter then you’re through to the end where the judges will make the decision on the winner.

It couldn’t be any simpler just make them laugh for 5 minutes, a hyperactive, intoxicated, comedy craze audience!!!!!! The running order was given and I was in the second half, one of the worst things is the wait, the wait till it’s your time to perform, after seeing the success and end of 11 comedians , it was my turn, the audience seemed 10 time more interactive then when the show started 1 and half hours ago, I was nervous and had no clue of how my set would work, after the first joke and they laugh, I just decided to have fun, my energy was in full rage so I just kept throwing jokes that where life experiences from my set and before I could even think, I heard a cheer and had made it to the end of my 5 minutes. The audience was in full swing high-fiving me and roaring with laughter. I wasn’t sure at this stage if I had won as there were 4 other comedians that got through and there were still two left. After the final comedian had performed the host stated that they will be taking 5 minutes to deliberate who the winner was.

Prosecco, Laughter and full packed audience brings nothing more than joy!!! Then an over whelming amount complements for my set and texts about the TV show, trust me this was a great night!! 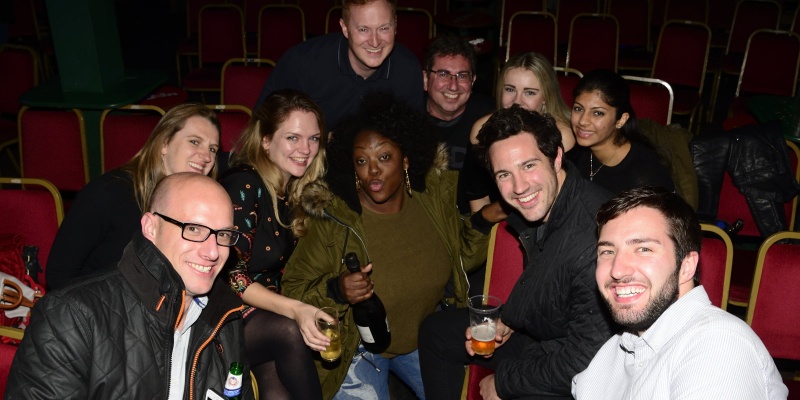 Looks like it was a wonderful night! Congratulations on the new TV show!