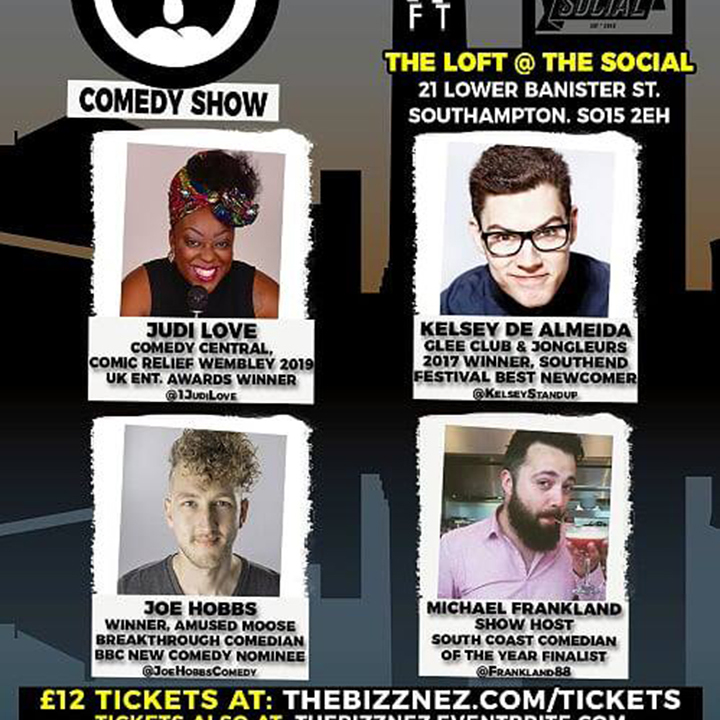 Private Bar Area For The Show

Official After Show Party At XOYO

Free Entry To After Party With Your Ticket

After choosing you dish from the menu, email us to put in the order for you at contact@thebizznez.com

AFTER SHOW PARTY TILL 2AM, FREE ENTRY WITH YOUR FUNNY BIZZNEZ COMEDY TICKETS

WHO THE HECK ARE THESE COMEDIANS?

Back in Southampton due to popular demand after her Southampton debut over a year ago on our stage Judi was born in Hackney, East London to Jamaican parents, Judi is the youngest of five children and has always been the comedian of the family & spent the vast majority of her youth in and around the East London area.

Judi’s motto ‘Laughter is Healing’ provides a very accurate insight into how she deals with life’s many obstacles. Judi will take everyday situations, add her unique perspective and turn it into something hilarious. It’s the type of humour that resonates in people from all walks of life.

Judi Love’s natural charisma, sharp wit and animated communication style keeps her in constant demand for; stand up comedy shows both as a performer and host. Private functions and special occasions like mother’s day, hen parties and wedding receptions. She is also in demand for TV ad radio shows.

Judi’s has built a solid, loyal fan base & has also been a pioneer in creating fan favourites like; Real Talk, The Love Kitchen, Rants and Nursery Rhymes with Judi Love

Kelsey is a 22 year old stand up comedian who plays to audiences across the country. With a mix of observations and storytelling he hopes there’s something in there for everyone to enjoy.

He supported Stephen K Amos on his 2015/16 UK tour ‘The Laughter Master’ & at the Underbelly Festival in Summer 2016 on London’s Southbank.

He performed at the legendary comedy night ‘LATE N LIVE’ at the Gilded Balloon (main room) at the Edinburgh Fringe Festival 2015.

His credits include when he was 15 he won ‘Best Joke’ in a Mock the week competition and also won ‘Best gag’ for a online competition in 2011 for Teenage Cancer Trust’s comedy benefit night (both of these were before he started performing stand up).

“Opened for me on tour, a superb act to follow. Blown away by his funny, they loved him…Catch him now, he’s got it.” – Stephen K Amos

“Clear Standout, has a very good comedy brain for a 20 year old, will only get better as his confidence improves” – Glee Club

He is now gigging in comedy clubs up and down the country, and in 2019 has been selected by Leicester Comedy Festival for their Circuit Breakers Showcase.

"Joe Hobbs felt like a pro comedian the moment he stepped into the spotlight...he performs with skill and irony... man of the match for me." - Steve Bennett, Chortle

Michael Frankland is a comedian that is rising up the ranks fast. With his quick wit and a combination of self deprecating story's and one liners . You can't help but route for this underdog of life. He has performed up and down the UK and Europe at various venues and festivals.

Nominated for the prestigious guide award for best comedy act 2017 and a finalist in the south coast comedian of the year 2017.

Michael brings his own style to the world of Comedy! His material is brilliant and his stage presents is great! A MUST SEE ACT! - Hookline Comedy

"Michael Frankland keeps the audience howling with laughter with his blend of hilarious anecdotes and relatable situational comedy." - 50fiftyenterainment